How can I make scroll bars always visible?

Android hides scroll bars unless the window is actively being scrolled. This makes it hard to tell if a window can be scrolled without actually trying it. Is there a way to force Android to always show scroll bars when there is something to scroll?

I have a Thunderbolt running Android 2.2 (Froyo).

IMO, it wouldn't be a good idea to always display the scroll bar, as the scrollbar is in the content area and may obscure whatever is in the screen.

The scrollbar visibility and fadeout effect can only be defined on the application itself at a programming level, there's no general option to control this.

Developers tend to follow the best practices, regarding small screen devices, since the space is limited. The general concept here is to have scrollbars hidden while not in use, since they appear over the content being presented. This is due to the limited space available, that portable devices tend to have.

Don't know if you ever noticed that scrollbars on smart-phones and tablets appear over the contents, and don't have a designated space as we see on desktop computers: 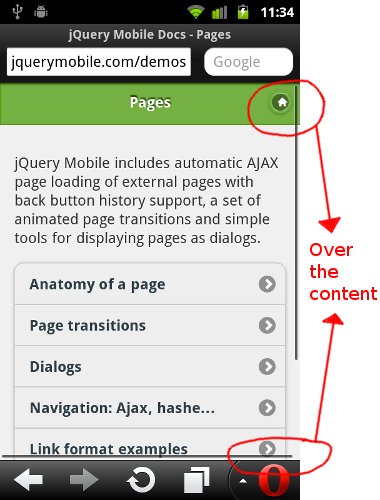 It's all about the UI, and unfortunately for you, it's the general concept that AFAIK isn't going to change.